The Historical Game of Rolley-Hole

THE HISTORICAL MARBLE GAME OF KENTUCKY AND TENNESSEE HISTORY OF THE GAME OF ROLLEY-HOLE The traditional marble game that is played along... 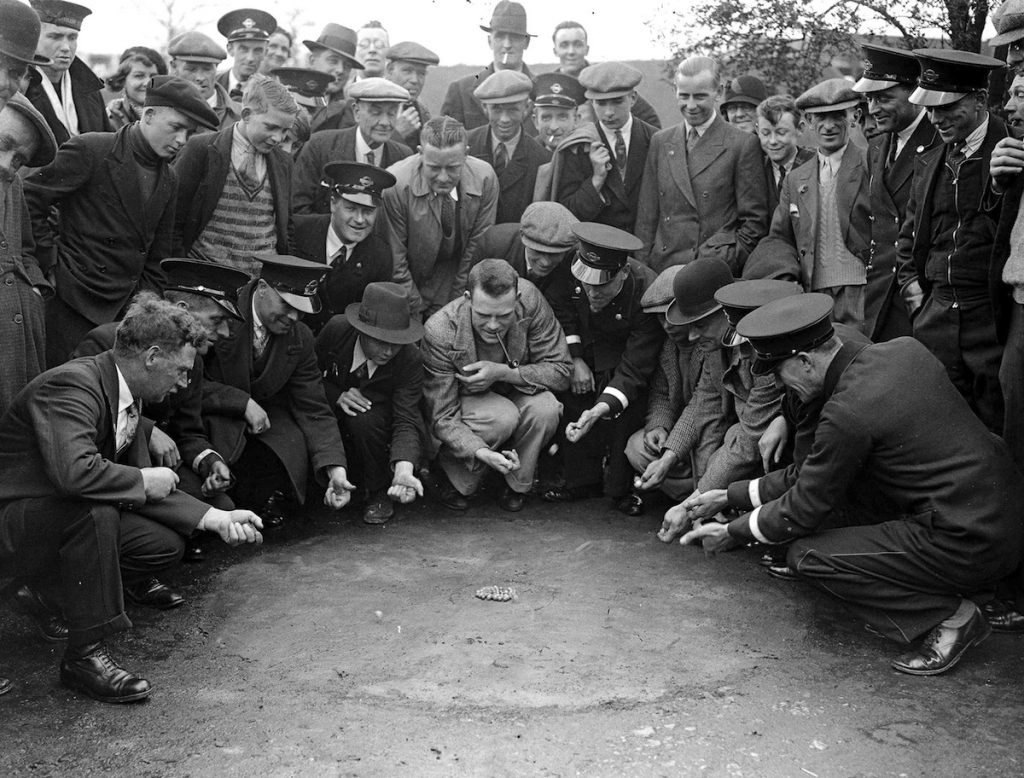 THE HISTORICAL MARBLE GAME OF KENTUCKY AND TENNESSEE

HISTORY OF THE GAME OF ROLLEY-HOLE

The traditional marble game that is played along the Kentucky and Tennessee border is Rolley-Hole. The game of Rolley-Hole is played at the International Marbles Festival each year at Standing Stone State Park in Tennessee and at the Monroe County Marble Club�s indoor Super Dome in Kentucky. The traditional marble used in the game is made of flint-stone and each player uses only one marble.

HOW TO PLAY ROLLEY-HOLE MARBLES

All games are played in yard that measures 40 feet in length and 25 feet in width (40′ by 20′ in Monroe, County.) The yard has three evenly spaced holes that run down the center of the yard in a line. The object of the game is that each two-member team must shoot their marbles into each hole traveling up and down the yard three times in succession and try to keep the opponents from getting into a hole at the same time. Each of the players try to make 12 holes in succession and the first team to successfully make all 12 holes wins the game.

To start the game a coin is tossed to determine the order of play. The player who wins the coin toss proceeds first followed by an opposing team member. The third player to roll is the partner of the coin toss winner. The first play is from behind the bottom hole towards the middle hole.

The players use Rolley-Hole terms to tell each other the next hole the player is trying “for” (needs to “make”):

A player that rolls his marble into a hole is “for” and “makes” that hole. The player wins a chance at another turn to shoot.

A player who rolls his marble within a span (the distance from the thumb or marble position to the end of the farthest outstretched finger in the same hand) has made that hole, but must wait until his next turn. He will then be for the next hole.

A player that shoots into the wrong hole is “dead” and must wait until his next turn.

A player can shoot at a hole that has been made and can “make” that hole. Both team members must make the “out hole” to win the game.

A player may shoot at an opponent’s marble and will gain another turn for hitting the marble. But the player can only do so once every turn. If, on the next turn the player hits the same opponents marble then, he can shoot at the marble again or at the hole. After the third turn it is the next players turn.

A player who can hit two of his opponent’s marbles on the same roll receives two more turns.

COMING OUT OF THE CLOSET RE: CAT’S-EYE MARBLES

COMING OUT OF THE CLOSET RE: CAT’S-EYE MARBLES